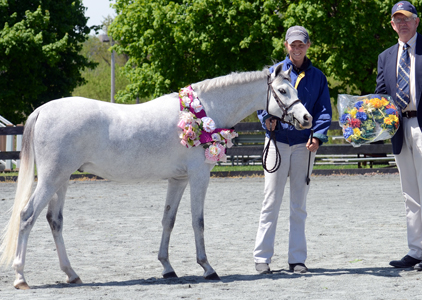 Rosehaven Merlin, a Section B Welsh pony, went to his first Welsh show of the year this past weekend. Being a two year old, he just shows in hand at the walk and trot. Classes at Welsh breed shows are divided by section and then by sex and age.

The champions and reserves go back into the ring one more time to compete for Supreme Gelding and little Merlin won again under both judges! That's when he won the flower garlands and the pretty horse-head shaped bouquet of flowers.

Merlin was a good boy at the show and handled the attention and getting flowers like a pro. For this show he wore the Smith Worthington Signature Bridle, one of our smallest bridles, along with a 4" British Dee Ring Snaffle.